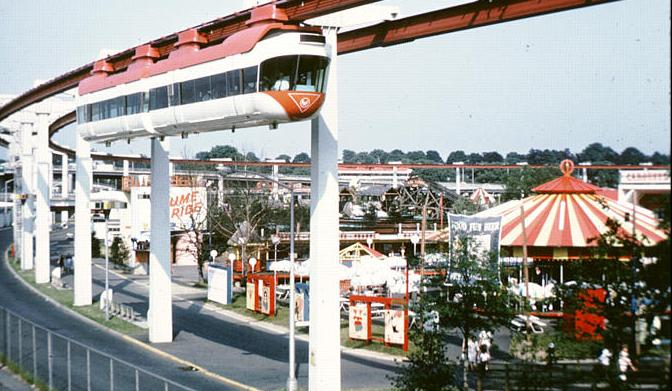 (Above photo from the collection of nycsubway.org)

Photo from the collection of Bill Cotter.

Click on the image for a larger version. Our correspondence below is outlined in the form of Q&A

This Q&A has been edited for content from correspondence in 2003.

How were you involved with the carousels at Coney Island?  (I am) the person described on the back of the Carousel Park record jacket, and who originally saved Feltman's and then bought Stubmans to supply the needed machinery (especially the crown bearing, which had cracked on Feltman's), and subsequently brought in Greer Marechal.*

You recently reviewed some of your archive films of the carousel. Did it show construction of the carousel? How was your visit back in time?  My visit last night to yesteryear cleared up at least one thing in my fuzzy memory: The Stubbman carousel (spelled "CAROUSELL" on its sign) was indeed on the Boardwalk. (Rides look to have been 15 cents [although it was hard to read the sign]; and, unlike carousels in the subsequent liability-conscious, insurance-sensitive age, the brass ring machine was in full operation.) I had fitted one of the Feltman horses onto it (prior to refinishing the horse) for a test run, and was trying it out in the film.

Other Coney Island scenes show the unused  commercial laundry plant on Neptune Avenue that we used to refurbish the Feltman horses, and scenes of the work in progress. We hired a local Coney Island artist for the refurbishing job. (His other specialty was those wooden cutout figures that one found all over the amusement park sites. I'll try to find his name.)

And yes, my film contains extended and rather corny footage of the construction site for Carousel Park prior to arrival of the carousel. It shows the boardwalk portion and concessions under construction, with "Pizza Place", to be operated by Vinnie Mastro, on the right-hand side as you face the boardwalk. The spot for the carousel is simply laid out with a round wooden frame.

Also shown in later shots is the resident clown interacting with the kids. We also had a pet miniature African elephant that carried a Carousel Park sign around the Fairgrounds. Its name was "Champagne", as I recall.

How did Carousel Park come about?  The original site I negotiated for the carousel was a very large parcel in the Industrial Sector, near the main gate (near IBM), that became available at the last minute when plans for an amusement park-type exhibit by H.L.Hunt was cancelled. It was too late for the Fair to install a new industrial exhibit, and our carousel could be erected and landscaped quickly and in time for the opening day. I had a preliminary understanding with S&H Green Stamps (Sperry & Hutchinson) to host the carousel park as a turn-of-the-century park, with costumed personnel of the period, broad lawns and walks, etc., and based on the S&H Green Stamp theme: "The Old Fashioned Way to Save". When S&H got bogged down in the details and couldn't make the deadline, their participation was dropped. The Fair opened without the carousel, but the Fair kindly agreed to let me still open a carousel exhibit in the Amusement Section after the opening. Thus started the saga, and an ever-growing cast of characters, that ultimately led -- through many twists and turns (including the necessity to purchase the Stubbman Carousel) -- to the creation of Carousel Park.

Can you tell us about the Quote Records recording?  Here's a research task: In making its recording of the band organ, Quote Records taped much more music than they ultimately utilized. It was great stuff, and it would be well worth tracking down. Somebody may have those reels. Perhaps some of the individuals credited on the back of the album, if they can be located, will recall who the producer-owner was.

Tell us about the horses?  The horses on the (album cover on the) upper left, and in the background on the upper right (i.e. with longer faces, and Botticelli-like manes) are from Feltman's Carousel.  The (other) horses on the record cover are Stubbman ponies from inside rings -- no comparision to the mind-blowing Botticelli-like horses of Feltman's (and probably the outside Illions' horses on Stubbmans).

With respect to lost horses from Worlds Fair carousel, these must have been disposed of prior to or during installation at the Fair. No one informed me at the time, else I'd have a set of them right now. What a shame! (How do you like the prices I paid? $12,500 for the entire collection of Feltmans horses, animals, and chariots, plus band organ; and $25,000 for the entire operating Stubbmans carousel!!!)

How often were you at the fair?  I visited the Fair quite often. In fact, the reason I originally bought Feltman's carousel was so as to get an exhibitor's pass and unlimited access. (It would have been a lot cheaper to buy a daily pass for every day of the Fair -- but a lot less exciting than the adventures that followed.)

Was the venture profitable?  Profitable at the Fair? Hardly. Although it generated a major tax-deductible loss for the wealthy backer of Carousel Park; I broke even on my cash layout.

You were interviewed for the film “Peace Through Understanding”. Have you seen the BBQ Productions documentary?  Yes, the screening was terrific... It was amazing to see such a jam-packed crowd of rabid World's Fair fans, exchanging recollections, etc. And Curtis and Terry were most generous in their treatment of the carousel,
using it as a recurring theme throughout the production.

What do you think about the carousel today?  I like having the carousel in the park, but am afraid it is not in particularly good condition. Ideally the horses should be kept in prime condition, the band organ(s) operating (rather than taped music) -- can't remember whether both organs ended up in the park (I originally had two). What the carousel needs is an angel, or an endowment.

How did you gain interest in participating in the World’s Fair?  …My love for World's Fairs… stems from my visits to the 1939-40 Fair when I was six years old. The Trilon and Perrisphere are vivid memories, along with a half dozen others (such as Frank Buck and his elephants, GM, and the Singer Midget Village).

*Note: Mr. Greer Marechal was a patent lawyer who was a primary backer for bringing the Carousels from Coney Island.